After an eventful two months of August and September, EdgeGamers would like to fill you in on everything that has happened. With big changes and updates to a large number of our games all the way to additions of several different games, EdgeGamers seems to be ever-expanding and looking for new opportunities to jump right into. Thank you for joining us on this journey, we look forward to taking over the gaming world with you!

CS:GO
- Jailbreak: Server Specialists are testing new maps
- TTT: Happy Halloween! Get your spooks on with new Halloween themed maps *Coming Soon
- Minigames: Expect those troublesome cheaters to no longer be an issue
- Surf: Future map additions
- Bhop: Working on adding a bonus on every map in the map pool

DESTINY 2
- Established a second clan due to the number of new players joining
- Looking to become an EC? Contact @Power_Outlet or @Forteces to join

GTA
- GTA is planning a DNA/EVIDENCE update... be excited for that MEDIA
- Media Team are accepting new applications > if you would like to apply as a writer, video recorder, video editor, interviewer, socials, or an artist, please message webby#0666 on Discord
- Media has undergone super secret projects that should be announced soon. Keep an eye out!
- @heidi was promoted to the Socials manager in September

MEMBER SERVICES
- MS Held a public open forum, which was a huge success
- Applications to join MS will be opening soon
- Processors will be processing applications soon

MINECRAFT
- Updated survival server to 1.16.X.
- EC Project railroad collection has started and is being built
- ABC project where the EC team will be collecting 540 stacks of each item has started as well
- Upcoming admin training for admins wanting to play on the new update

WORLD OF WARSHIPS
- Clan battles started for the 11th season, back on our way up the rankings
- We fought in the King of the Seas tournament; was successful for a first-time competitor
- We will be fighting again in the next one

OVERWATCH
- @Wish was promoted to manager
- Halloween event starting soon
- Discord has gotten bigger; easier to meet and make new friends
- We are working on new cool features and rewards for being active in the discord

SQUAD
- Servers officially released on October 2nd, 2020
- @AdurpAdurp was promoted as the first Squad manager
- @Coder made his return as a Squad manager 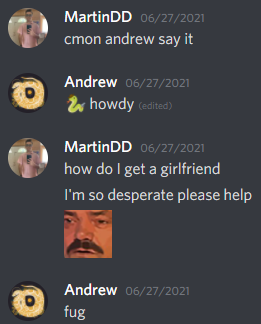